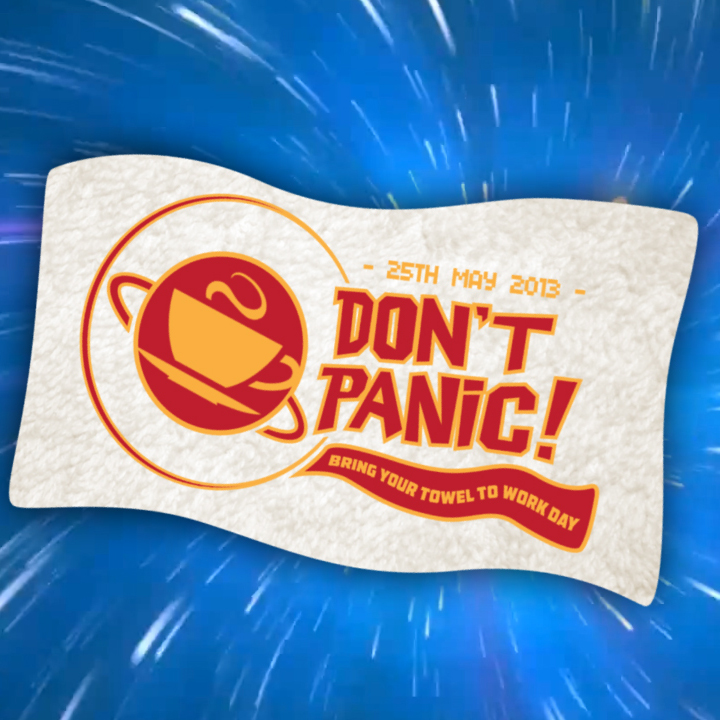 Its time for blend number 5 of our guest blend range, and this month its called “Don’t Panic”

I love Hitchhikers guide to the galaxy, not the new rubbish film, but the book and the bbc tv series and radio program that was spawned from the book. I don’t do a good job but I always try top hide my geekisms, but this is one area I struggle.

On May the 25th each year its towel day, celebrating the life and works of Douglas Adams who passed away in 2001 on the 11th of May. So two weeks after this every year since theres a small bunch of die hard fans who celebrate by taking a towel with them. I know this might be tough for you, so with every bag of this blend you will receive an emergency towelet to hydrate and expand and use should an emergency arrive.

So why don’t panic ? We have blended two coffees together that in relaity should install panic and worry. We have used our colombian DECAF and our El Salvador Finca Argentina Fincona 1 CATIMOR Washed, two coffees that if you had not of tasted them would scare the heck out of you. But you know what, rules are there to be broken and this just works as an amazing delicious coffee. The fact that both of them taste lovely on their own, gives a good clue to this is an amazing coffee.

The blend will run for one month or until sold out, so do not hang about. You can buy it here, or read the website description here

This is the 5th (I so wish it was 42nd) in a new “galaxy” of guest coffee blends we are introducing in 2013. Each month there will be a new blend for which there will be an original label in a different style of bag, and of which there will only be 500 made. Each bag will be marked with a unique limited edition number.

These are the blends most roasters would be scared to share with you, but not us fearless souls at Has Bean Towers with our looking to the stars, going to that extra mile and on to the next solar system and all the other stupid sayings you can think of. In the cup think unbalanced, off-the-wall experiments that are tasty but never normal, and are always a bit unusual and pushing the boundaries. This months is taking that to a new space and time dimension.

We have also decided to name them with equally appropriate stupidness. In honour of the towel day on May the 25th to demonstrate our appreciation for the books and the author Douglas Adams, who wrote ‘The Hitchhiker’s Guide to the Galaxy’. The commemoration was first held in 2001, two weeks after Adams’ death on 11 May 2001. But why a towel I hear you cry ? Well…..

The original quotation that explained the importance of towels is found in Chapter 3 of Adams’The Hitchhiker’s Guide to the Galaxy.

A towel, it says, is about the most massively useful thing an interstellar hitchhiker can have. Partly it has great practical value. You can wrap it around you for warmth as you bound across the cold moons of Jaglan Beta; you can lie on it on the brilliant marble-sanded beaches of Santraginus V, inhaling the heady sea vapours; you can sleep under it beneath the stars which shine so redly on the desert world of Kakrafoon; use it to sail a miniraft down the slow heavy River Moth; wet it for use in hand-to-hand-combat; wrap it round your head to ward off noxious fumes or avoid the gaze of the Ravenous Bugblatter Beast of Traal (such a mind-bogglingly stupid animal, it assumes that if you can’t see it, it can’t see you); you can wave your towel in emergencies as a distress signal, and of course dry yourself off with it if it still seems to be clean enough. More importantly, a towel has immense psychological value. For some reason, if a strag (strag: non-hitch hiker) discovers that a hitchhiker has his towel with him, he will automatically assume that he is also in possession of a toothbrush, face flannel, soap, tin of biscuits, flask, compass, map, ball of string, gnat spray, wet weather gear, space suit etc., etc. Furthermore, the strag will then happily lend the hitch hiker any of these or a dozen other items that the hitch hiker might accidentally have “lost.” What the strag will think is that any man who can hitch the length and breadth of the galaxy, rough it, slum it, struggle against terrible odds, win through, and still knows where his towel is, is clearly a man to be reckoned with.
—Douglas Adams, The Hitchhiker’s Guide to the Galaxy

To honour this you will also receive your own easy cary towelet for next time your caught out in Betelgeuse that can be hydrated in any emergency.

In the cup this is the bravest blend yet, but I think it works. Expect big sticky mouthfeel, with a cherry drop note, and with a milk chocolate sweetness that just makes this a sticky fest. These are two coffees you wouldn’t normally blend with a decaf and a catimor but you know what, this is why rules are meant to be broken.