So this week we launched a new coffee. Nothing new there, but this was a little different.

On my recent trip to Colombia I cupped a heap of coffees. There was one on one of the tables that confused me. Colombia is famous for not doing any natural process. There was one coffee on the table that wasn’t natural, I knew this, but had some of the hall marks I have come to expect from naturals. But it was delicious. Like really delicious.

On the reveal I was told something that rocked my coffee world. The evening after I cupped it I couldn’t sleep, every-time my head hit the pillow, it bounced back up again with questions questions. So what was this coffee ? A decaf. It wasn’t the decaf that was keeping me awake, it was something far more important, something far more difficult to comprehend.

But not only a decaf, its caffeinated brother was on the same table as this, and I scored this lower in my cupping scores. The decaf process always imparts some kind of taste but its normally bad, it makes the coffee less tasty ,less interesting. This had made it more, made it more interesting more depth more flavour. Something had happened to make coffee better that was man made.

The decaf process is a new one. Most decaffeination happens at either Germany (CO2 method) or Canada (swiss water) or Mexico (Mexican water). I liked the mexican water as it adds some value at a producing country means more money can go back to where coffee is grown. It also means theres normally less food-miles on it. A slightly strange thing to worry about when coffee already travels half way around the world, but something that I think about.

This decaf process for this coffee, happens 40km from the central place our container gets loaded with our colombian shipment. It means we get the coffee quicker, with less miles and adds value in Colombia. It also uses an interesting product to do the decaffing.

To extract caffeine from coffee you need a solvent, something it will stick to to remove from the coffee. Ethyl Acetate is such an adhesive, and something thats naturally found in in lots of food stuff.Colombia is well known for growing coffee, but also sugar cane. The grow lots and lots of it. So they use Ethyl Acetate (EA) from the sugar cane, and dissolve it into water for the caffeine extraction.

Another claim they make is that EA decaffeination removes irritant substances that benefits people with sensitive stomachs.

I’ve poped some of the promotion images they sent me to show the process below for those interested.

So the one I was sampling was already spoken for, but from the caffeinated version we cupped we looked for something similar, and took the plunge getting our own decaffeination done for the first time from a complete lot. It also meant we could keep some caffeinated for you to try the same experiment. The first time I tasted it decaffed was last week when the container arrived. Thank god it was tasty and what I expected.

As far as I know we are the first people in Europe to bring this in, I am sure we wont be the last. But this isn’t the big question. The big question is the imparting of taste, what else could be done to make a coffee something else.

I am not saying we should, in fact this is the reason for the sleepless nights its a terrible horrible thought. But its a thought I can not get the questions out of my head.

The other question, is how can a decaf be so so tasty.It really did surprise me. Great a blog post full of questions more than answers, just what the world needs. 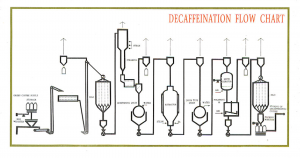