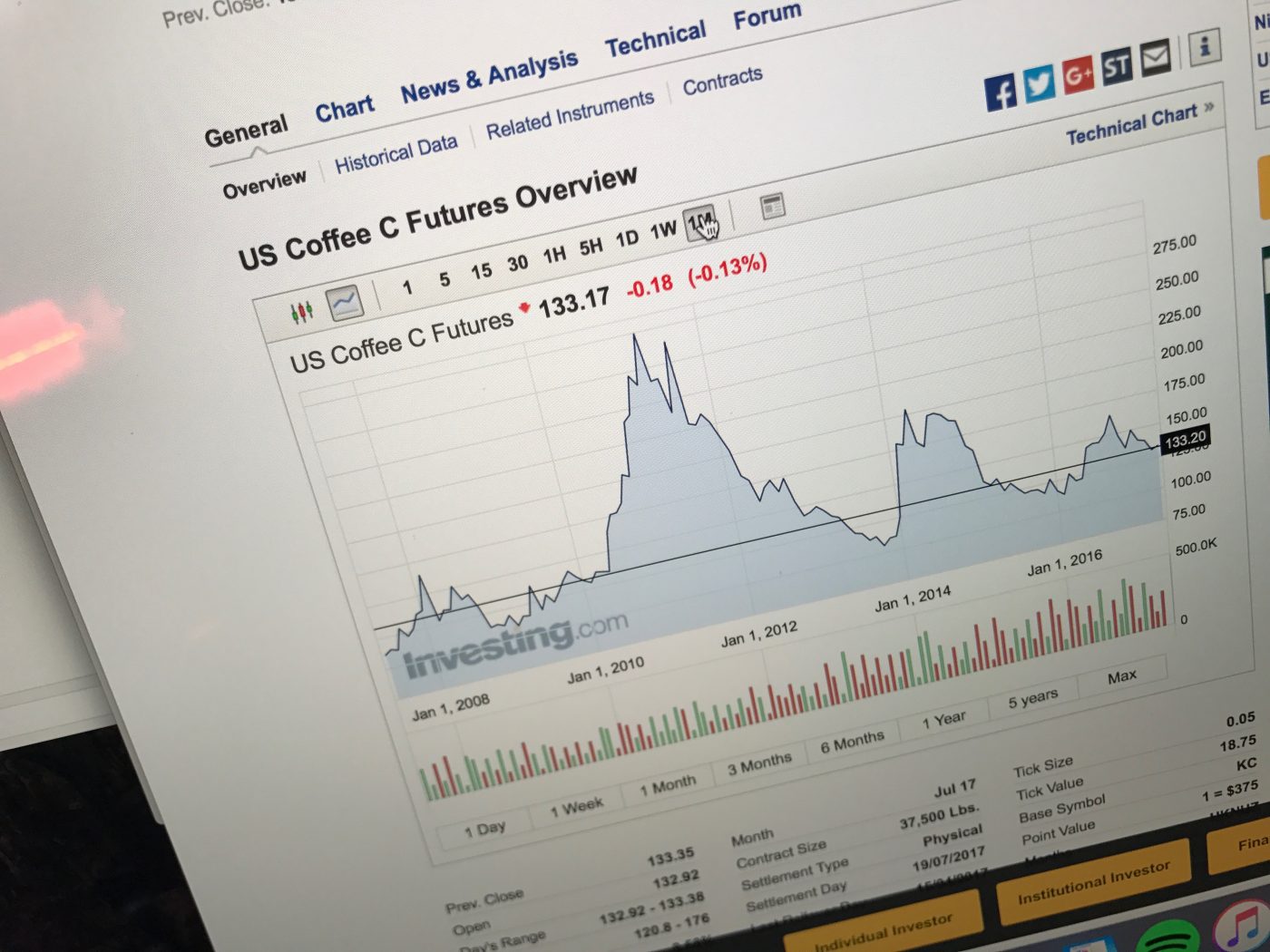 I’ve always gone along with the idea that the C price in coffee is nothing to do with me. But I’ve started to change that opinion of late

So what is the C price ? The C price is the price paid for traded commodity coffees at the New York financial exchange. This is a two-fold market of current prices and also a futures market for purchase of contracts for coffee for a later date.

The prices are dictated by a few things, but in a stable market these main things are weather conditions at origin which will have an effect on yield for that year. There is a saying if Brazil sneezes the rest of the world catches a cold, and this stems from this kind of thing. Markets are heavily influenced by statements from coffee-producing countries’ organisations, regarding dropping yields or a lack of supply of coffee in the market. Like anything supply and demand are very important factors.

Coffee that we buy have no resemblance to this price and I’ve worked hard over the years to make producers ignore the “c” and focus on things like cost of production and then the rewards they deserve for the coffee. Cost of production can vary from varietal to varietal and reward can fluctuate depending on rarity and demand.

Its been a clean easy mechanism to work out what price we should pay for a coffee, well so I thought.

So why the change of heart and the focus on watching the “c” price? Every farm that produces specialty coffee will have some commodity coffee, the stuff that doesn’t taste so good, the smaller beans, and broken / black beans. These beans have to find a home, and its often on the commodity market that they are sold.

I’m not even going to touch differentials if you want to learn about them go here http://www.hasblog.co.uk/coffee-prices-differentials-and-premium-quality-coffee-relationships. But for now lets keep the numbers simple

The fluctuation in the market means that the profits of a farm can fluctuate with them. These numbers are very complicated unless your talking about a real farm, and I’ve yet to have this conversation. So I’m going to use some very basic numbers to prove the point.

So say a farm that produces 450 bags. 60% of the coffee sells at $4.50 a lb FOB to the speciality market. The remaining 40% is subject to the commodity prices at the time. The fixed income is the relatively good at $184824.59 for the 270 bags of specialty. But what does the market do to the other prices

Now these figures are probably way off, but they do demonstrate how much effect a swing in the New York ‘c’ can have on the life of a producer in an imaginary world.

The ‘c’ in 2011 was a freak occurrence that doesn’t happen very often. Stock markets were down, currencies unstable and commodities were really targeted by the rich as a place to put their money. The market was being manipulated by very wealthy banks and hedge funds to keep making money in the tough times. Prices at the moment are low, and in many cases lower than production (this is where differentials come in places like Kenya compared to say Brazil have very different harvesting costs).

So lets set a mid price of $1.60 for the C to be a healthy market. This would mean that a good profit for the imaginary farm being set at $228634.86. My proposal would be to set a sliding scale of payment on that $4.50 a lb coffee and when the market rises, that price would drop to the producer and when it drop the “specialty” coffee rise. For instance the coffee on the 1st of April 2017 would be $37997.20. So if you set the price at $4.64 in stead of the static $4.50 you cover the loses of the producer in the specialty price.

But if April 2011 ever happened again then then that “speciality” price would drop for instance $3.57 meaning the producer still got the $228634.86 which involves profit and wages but the roaster is protected against what would be a rising market. You see when the market rises and spot purchases from importers and negotiations with new suppliers are always much higher than when the market is down even if we pretend to ignore it. I kind of see it as hedging the market both ways for producer and roaster.

Now these sums are very basic, and I’d love to sit down with a coffee producer and give them some real meaning but there has to be some milage in this idea, so a farmer can plan for the year knowing exactly what they will bring in, and roasters can plan and not be adversely hurt by a changing market. Its also easier to put raises in costs of production again, sitting down year on year and working out the best price to pay depending on the market.

How do you continue to motivate the farmer to produce quality. I don’t think this model would fit every producer and very country (and I don’t know if it would even work. But I think the majority of producers we work with are not motivated by money, but by producing great coffee and having some stability in pricing. I’ve had some of our farmers approached by other roasters wanting the coffee and offering more money, but our team tend to know that I’ll be back every year, and thats a motivator in itself.

– we’ll buy XX lbs of coffee of coffee next year provided they are available and cup at 85+
– We will guarantee a premium on this quantity of coffee,
– we will raise/lower this premium to factor any financial impact incurred by changes in the C-market on any coffee produced that cups below 85 to ensure stable profits
– we will invest x% of profit from this years coffee into future innovation on your farm

These are just muses, and stuff I’ve been thinking about, but I will approach someone and get the real figures and see if we can do something on one farm see if its even possible and if it is just to trial this out. I’m sure theres another blog post in the future about this too.