So this was a huge month, this was the month of the World Barista Championship and the month of my trip to Atlanta as part of Team Ireland and Team Harmon.

Atlanta was amazing, like one of the best experiences ever. I arrived a few days after the rest of the team had landed, so the new boy in a close team it felt strange. But the boys (David and Colin) and the wonderful Yvonne were so so kind and welcoming. Keep it in tyour mind we have spent a few hours together in the past, and I’d never met yvon it was crazy.

The big memory of the trip was the Friday the day of practice on the machine for Colin. We walked up to the practice area, traveling from the hotel together. As we approached I said to the guys “OK good look see you later!”. Colin’s face was a picture, I cant remember the exact words but it was something along the lines of “I don’t think so”.

My previous experiences of a WBC final I was the cheerleader, the team was built and together, and I was there as crowd support (and I enjoyed that very much too), but here I was integral to this team, we ate drank and slept competition, and I came away with a group of close friends that makes me go all gooey thinking about them.

You can go back and read about the gritty details just search atlanta, I tried for ages to find the photo that summed up the weekend for me nervous sitting on the floor with David Walsh behind me also looking like he is about to give birth, but couldn’t find it so these will have to do. 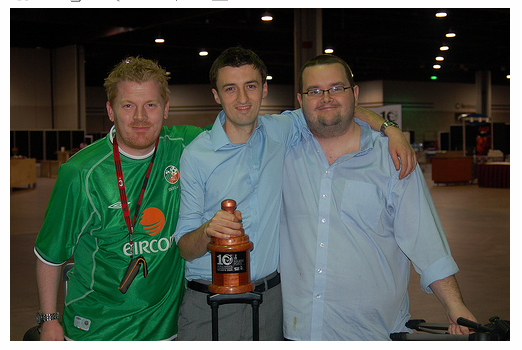 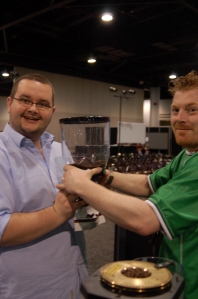 The finals scores were below and so pleased for the top man Gwilym winning, and great to see a UK win again, made me so proud. But very proud of the man who 12 months before couldn’t turn on a coffee machine to be the 4th best barista in the world.

TOP FOUR can you believe it. Someone came up to me at the end and said
“what has intelligentsia coffee, 49th Parallel roasters, Square mile coffee roasters and Has Bean Coffee Got in common.”
Has Bean also turned green for the weekend in honour of our Irish friends, was a great moment

It was also the beginning of the Tamper Tantrum videos we have done, something I have really enjoyed and is a thread of enjoyment intertwined through the year. Colin and I have become much closer as friends. Love the comments from people on the last post saying they thought we had known each other longer, and a good chemistry, tow mates talking coffee. The pre tamper tantrum is below with our good friend Ben, and I haven’t watched it for ages, good good times.

I love the name Tamper tantrum but it was so nearly plaquesdontlie, 13 chicken wing or spro.me all a close miss’s for what is a great name and for me a great fun. Enjoy !!