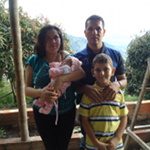 The trip in late 2012 to Colombia and Bogota has brought up many treats.

Some of the lots were so small they didn’t make a whole bag, which lead to some interesting places to sell them. Some of the lots were huge and we are still enjoying them. We have been releasing them as we felt they were ready, and this is the very last of those lots, and its something special.

My time in Colombia was spent in the cupping lab, cupping everything they had. Everything was separated into lots, and completely blind (as it should be). This allowed us to cherry pick what we wanted from them but looking for profiles and not being influenced by anything but taste. I must admit the standard was very high. What also struck me was the incredible diversity of this country, even with its 99.9 % washed process styles of coffee the cups were hugely different and interesting.

Selected blind I looked forwards to seeing the results, but was surprised to have selected two lots from the same farm, but with different notes and cupping profiles. And they were tiny. The whole farm is just one hectare so very tiny is the scale of things, but with this interesting difference in cup.

So not sure what to do with such tiny lots I have decided you can only try them if you buy them in a double pack which gives you a chance to try them side by side like I did. You can see they are related with a thread running through them, but side by side you can also see the diversity of them.

You can buy it here