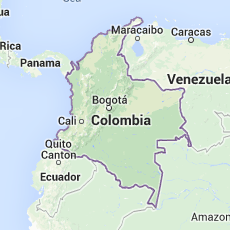 It is believed that the first coffee seeds arrived on the American continent thanks to the French and Dutch. The French introduced the seeds to their colonies (Guyana and Martinique) at the end of the seventeenth century, while the Dutch introduced them to Surinam in 1714. Coffee was first introduced to Colombia in 1723, thanks to Jesuit priests who brought the seeds from Venezuela.

The first information about coffee growing in Colombia dates from 1732. It is said that the first coffee trees were grown in the Jesuit Seminary of Popayán, which is in the department of Cauca, and later in 1741 in the provinces of Santa Marta and Riohacha. The first commercial plantations date from the end of the 18th century in the departments of Santander and Boyaca, and later in the hills surrounding Medellin.

In the second half of the nineteenth century, after Colombia’s independence from Spain, coffee became much more widely grown. At this time coffee prices were much healthier than today. According to the record books, Colombia’s coffee production increased from 1,000 bags per year to 100,000 bags per year between 1850 and 1880.

Fast forward to 1905 and the country was producing 500,000 bags. Fast forward a bit further to 1930, and it was exporting over 3 million bags. The expansion of coffee growing throughout the country had significant effects on the economy, exports, and political structures. Colombia became a power house of coffee representing around 10% of the total world production, and at the same time also became more organised as a body.

In 1927 a group of coffee growers met in the town of Medellin to create an organization that eventually became the Federation Nacional de Cafeteros de Colombia (the FNC) we know today. The main goals of this federation of coffee growers were to improve the prices that producers received for coffee, and to work together as a union to improve the name of Colombian coffee across the world. It was actually a very forward thinking idea – that if people thought it was a quality product they would pay more. So they began an advertising campaign, which still runs today. They created a spokesman and donkey, the fictional character of Juan Valdez, who has been used in many adverts.

The FNC guarantees purchase of green coffee, but farmers are under no obligation to sell to them – they can still sell directly to buyers. But what it does allow the farmer is to have the security that they can get a certain price in the market, but also maintain a higher than normal price for the coffee.

The coffee market in the commodity sense works with a price set by the ICE (Intercontinental Exchange) formally known as NYBOT (the New York Board of Trade). This is known as the New York C Price, where traders can buy or sell futures on this market against what they think prices will do. This price fluctuates up and down just as a share price might do (but sometimes much more violently). A frost in Brazil can send the price soaring, whilst a country reporting that the harvest will be plentiful and above expectations can send the price through the floor.

Each country will have what is known as a differential. These are country premiums on top of the commercial market price for any grade of Arabica coffee. So any one will be able to achieve this price, and there will be lots of people offering to take it off their hands for these prices, with no regard for quality. To give you an idea of the prices, take a look below for snap shots of the differentials that I put together a few years ago.

So as you can see, Colombia has done a good job of getting a higher price than the rest of the market. Much of this is down to the FNC.

This all sounds like a bed of roses, but Colombia is not without its issues. A booming economy leads to rising costs – not just for labour, but for everything. Colombia is booming after many years of unrest from rebels. The peace talks have brought prosperity, but also these issues.

Much of the unrest was brought about by the drugs trade, which at one point nearly broke the country. Safety was a real concern, as was any investment in a fragile economy. Although lots of this is now sorted out, drugs and gangs are still an ongoing problem in rural parts of Colombia.

Leafrust, or Roya, is something which has been in the coffee buying and producer news in recent times. It’s a fungus that is spread through the air as well as by contact. It attacks the leaves of a plant, leaving the plant exposed and in some cases killing off the coffee plant. At best, it reduces the yield of the coffee dramatically. However, this has been something affecting Colombia for a very long while, and has been a persistent problem.

Climate change is also something that has affected Colombia more than most, with increased rain causing new problems with coffee growing. Rains during flowering knock off flowers, as well as causing dramatic drops and rises in temperature at times of the year when it was never expected – all affecting the fragile coffee plant.

Also, during the ultra lows of the 1990s and the famous coffee crisis, small scale 1-2 hector subsistence producers were hit hard. Unlike bigger plantations, they were not able to “ride the storm,” and many of them ripped out coffee plants and planted more productive and stable products.

What Colombia has done very well is breaking the country into to defined regions. These departments are very defined and exhibit certain broad taste profiles.

Coffees from the department of Huila tend to have HUGE sweetness, and thick milk chocolate and caramel tones that lend themselves to bigger bodies. The department is big and very spread out. Pitalito and its surrounding area is becoming the largest coffee producing region in Colombia.

Another top area for specialty coffee is Nariño. La Union is the main specialty coffee producer, in the far south west of the country, with part of the department being coast, and part high mountainous region. Most of the population resides in this high mountainous region, with its capital being Pasto. In the cup the typical profile is a buttery mouthfeel with big bodies and light acidity.

Located in the Andean region, in the centre west of the country, it neighbours the famous Hulia. The south of Tolima is currently a centre of FARC Guerilla activity and it is of strategic importance in Colombia’s ongoing civil war, so it’s a tough place to go find coffees. The capital of this department is Ibague, with the coffees here being typically floral and with bright acidity.

This department includes coffees from the Inza region and those areas surrounding the Popayan. Caucas, in my experience, tends to exhibit delicate floral flavours and fruit acidity, along with big sweetness. However it often lacks power, punch, and body.

All these states in Colombia share the spine of the Andes Mountains, which splits into three mountain ranges. This spine carries on through Peru and Bolivia, and manages to produce some of my favourite coffees. It was always thought that the Caturra varietal was the best for these regions, and indeed in the cup it produces some stellar results. Originating in Brazil, this is a mutant from the popular Bourbon varietal. Caturra shares many of Bourbon’s negative aspects; it’s not very pest resistant, and can be difficult to grow. Its one big plus is its higher yield than Bourbon (over 200kg per hector). Its other bonus is that it can be used for high density planting areas, with as many as 10,000 plants per hector (normally around 6,000 though) and as little as 1 metre apart. However, with the big leaf rust problems I mentioned earlier, the FNC has issued advice to plant Catimor, Colombia, and Castillo varietals. It’s an interesting time for Colombian coffee.

Even though coffee exports only represent roughly 10% of Colombia’s total exports by value today, it is still a very important sector of the economy. There are over 500,000 coffee growers, who together own approximately 850 thousand hectares of coffee plants and produce an average of 9 million coffee sacks per year. Of these 500,000 families, 70% are small producers with less than 1.5 hectares of coffee land.